Kids and adults sitting in pairs across tables, hunched over, focused, devising schemes and plots in their minds. The goal, to bring down the adversary with a "CHECKMATE"!!! The event was IANH Chess Tournament 2015 held at YMCA Nashua on November 1st, 2015 from 10.00am-3.00pm.

The excitement on the children’s faces was palpable as they walked up to the IANH registration desk with their parents. For some, it was the very first time playing in a tournament. Some came to improve their chess ratings and for others, it was just to have fun and spend the day doing an activity they were passionate about. With the convenience of online registrations on the IANH website and on-spot entries, there were overall 31 participants.

The four round event was divided into three categories; United States Chess Federation (USCF) rated event for kids in grades (K-10), unrated for kids (K-10) and an open category for adults. The arbiters for the rated event were Bob Messenger and Kavya Mallanna who are one of the most recognized names in Chess in the New England area.

The event was kicked off with opening statements and an overview of the rules and general guidelines. The pairings were software based and the tournament was underway without any significant delay!!! 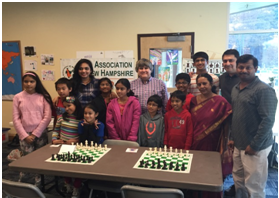 After four rounds of hard fought matches, the following players were declared winners:

The Celestial team was led by Kavya Mallanna, Founder and Director of Celestial Minds, Karnataka State Champion, Indian National Medalist, USCF Expert rated player and USCF arbiter. She was supported by her mother Professor K.R.Premaleela Mallanna, retired Sanskrit Professor and Indian National Chess player who has promoted Chess in Mysore district and is also a renowned poet. Bob Messenger who is a National arbiter and FIDE Chess arbiter ensured that the tournament stayed on schedule and ensured compliance with regulations.

The event would not have been possible but for the support of Erinn Kobisky, Welcome Center Director, YMCA of Greater Nashua and the YMCA staff who provided a great venue for the event.

IANH thanks all participants for making the IANH 2015 Chess Tournament a big success!!!